John Lewis Steptoe was born on September 14, 1950, in Brooklyn, NY and was raised on Monroe Street in Bedford-Stuyvesant. John Steptoe began drawing as a young child and received his formal art training at the High School of Art and Design in Manhattan. In 1966, at the age of 16, his first book and the very first picture book to capture the black experience, Stevie, a story based on his experiences growing up, received national attention when it was published in its entirety in Life magazine. It was hailed as “a new kind of book for black children.” HarperCollins published Stevie in 1969 at the age of 19, launching his career. During his twenty-two year career, he published 17 books, 11 of which he wrote and illustrated, 5 that he illustrated and a final one published after his death in 1989.

He received honors and accolades including the American Library Association’s Caldecott Honor for children’s book illustration for The Story of Jumping Mouse in 1985 and Mufaro’s Beautiful Daughters in 1988; He also received the Coretta Scott King Award for Illustration, for Mother Crocodile (text by Rosa Guy) in 1982, and Mufaro’s Beautiful Daughters in 1988. While all of John Steptoe’s work deals with aspects of the African diaspora experience, Mufaro’s Beautiful Daughters an African Cinderella story was acknowledged by reviewers and critics as a breakthrough. While accepting the Boston Globe/Horn Book Award for Illustration he said, “I am not an exception to the rule among my race of people I am the rule. By that I mean there are a great many others like me where I come from.” 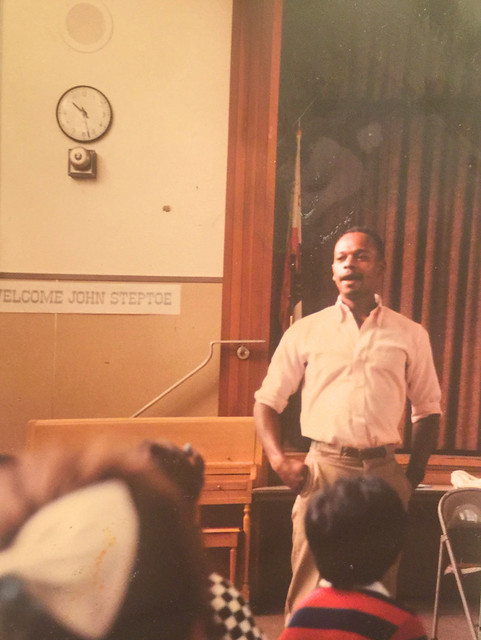 “I am not an exception to the rule among my race of people, I am the rule. By that I mean there are a great many others like me where I come from.”

Choose a Specific Fund or Cause

Give a One-Time Gift

35 Countries Around the World

All the Colors of the Race

The Story of Jumping Mouse

She Come Bringing Me That Little Baby Girl

Jeffrey Bear Cleans Up His Act

All Us Come Cross the Water

All Us Come Cross the Water
Lucille Clifton
Holt, 1973

Monroe Street between Ralph and Howard co-named after him to John Lewis Steptoe Place. Read more about this momentous event.

About Your Donations, Where & How They are used